There are three types of fuel systems used on the 5.9 Cummins engines, and these differences are the only major aspects that set them apart from each other. The engines are universal as far as transmission mounting, if a tranny fits one engine, it will fit another (providing the proper adapter plate is used). For states with emissions inspections, the general rule is to go with an engine of the same year as, or newer than the implant truck. Check with your local emissions inspector for specific laws that apply to your project.

While this type of engine may seem like a cheaper alternative, the cost and time it requires to update these engines for automotive use can be substantial. Click here to read more about Industrial Cummins Engines.

All 12-Valves are non-electronic injection pump engines and DO NOT require any electronics from the truck to run. The simplicity of the 12-Valve engine makes it the easiest to install, maintain, and most dependable. 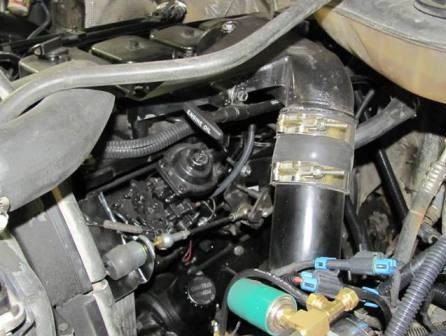 The 1989 - 1993 engines are readily available, inexpensive, get the best fuel economy stock, and have decent torque. These use the Bosch VE "rotary," injection pump which can be adjusted to achieve a little more horse power. The 1989 - 1991½ are non-intercooled. The 1991½ and newer are all intercooled. The non-intercooled engines can be intercooled if desired; it is highly recommended if you plan to turn the power up any to control exhaust temperatures. It's possible to add 40-60 HP with an inexpensive fuel pin so intercooling can be quite desirable.

The 1993 and earlier engines usually have a diaphragm style vacuum pump which does not work as well as the later style pump if your truck uses vacuum for brake assist.  The A/C compressor can also be an issue, as they are usually longer than the 1994 - 1998 versions, and use a different mounting bracket.  Most A/C compressors from 1989 -1993 used R12 Refrigerant which is expensive and difficult to acquire.  A few of the 1993 A/C compressor and A/C brackets are the same as the more conversion friendly 1994 - 1998 versions pictured below.  The vacuum pump and power steering mounting bracket will interchange. In addition to the already mentioned differences, some of the early engines have a different fan support that is higher and more centered with the engine. These fan supports work ok in the 1969 - 1997 trucks, although the fan is too high for the stock fan shroud it is at least centered. It does not work so well in the 1999 and newer trucks as the fan will not fit under the radiator shroud, and the shroud cannot be raised as easily as the older trucks. We have been told from a few customers that it works ok in the 2003 - 2007 6.0L diesel shroud. The older style fan hub does not work if you plan on using the factory tachometer. 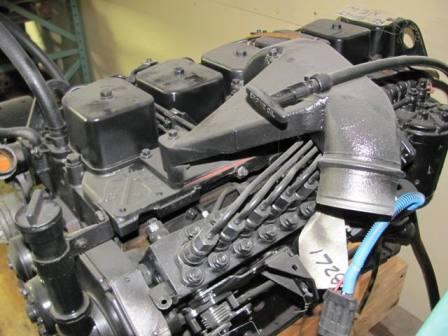 The 1994 - 1998 Engines offer good power and torque, as well as good fuel economy. These engines have the Bosch P7100 inline manual fuel pump which produces 160-215HP stock. With this pump, one can easily add 15-95HP by installing a fuel plate. These engines are possibly the most desirable 12-Valves because power upgrades are easily accomplished with fuel plate adjustments etc. If you get an extremely good deal on an earlier engine it may be cost effective to convert it to a P7100 pump if your desire is big Torque numbers.

There are many power upgrades that can be done to any of the 12-Valve engines without totally sacrificing fuel economy or reliability.

When using a Ford radiator that has the upper radiator connection on the passenger side, it is helpful to replace the thermostat housing with the housing we offer; it points straight up, so it makes the upper radiator hose connection easier. It includes a new thermostat and seals. When using this housing you will also need our Dodge alternator bracket. Radiators that have the upper hose connection on the driver side utilize the "new" style thermostat housing that points to the driver side of the truck. 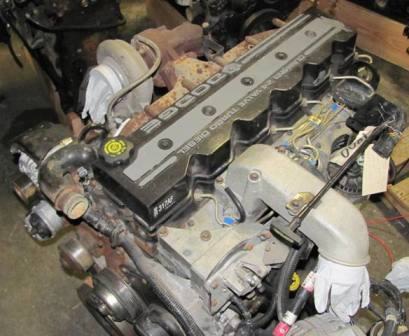 To ensure proper runability the ECM and PCM must year match.  If there is a mis-match you will encounter runability and other issues.

The 1999½ - 2002 24-Valve engines are computer controlled and provide a bit more horsepower than the earlier engines. For this engine we provide wiring instructions to help you make it run in your Ford or Chevy. The Dodge PCM is required if you want to use OBDII diagnostics or an aftermarket tuner that requires the data link connector. Without the Dodge PCM, diagnostic information can still be accessed at a Cummins dealer through the Cummins data link connector located in the engine wiring harness, but certain performance programmers will not work as a result.

The 2001-2002 engines require an electronic speed signal input to run properly. Ford trucks that have a rear axle speed sensor can easily accommodate this, and it can be done in an older truck with an aftermarket speed sensor. It’s just another thing you need to know.

Be aware that some of these engines have what is referred to as a "53 block." This number is cast onto the side of the block just above the oil pan rail on the rear driver’s side or front passenger side. These blocks are known to crack on the exterior water jacket.

DCS also offers a "Stand Alone" harness to make your Dodge Cummins 24 valve run in any chassis of your choice by simply adding power and ground. 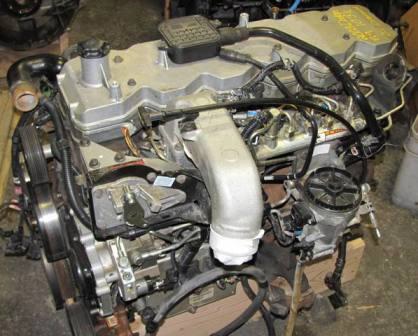 The Cummins common rail engines are a great choice for your conversion.   They offer great power and reliability.   Engine tuning upgrades can be done electronically with several tuning service businesses existing in the US and Canada.   Full engine diagnostic capabilities are also retained.

There are differences in the various model years you’ll want to be aware of before sourcing an engine.  If you are unsure if your ECM is from an automatic or manual transmission truck we can verify this if you provide us with the ESN listed on the ECM.  Below are some conversion related notes for your consideration.

We offer this information to make you aware there can be many differences between an Industrial Cummins engine vs. a Dodge Cummins engine. The cost and time switching these engines over can be substantial.

Possible Options to make an Industrial 24 Valve conversion-friendly:
1.) Use a mechanical injection pump from a 1994 -98 Dodge 12 Valve engine known as “P-pumping” the 24 Valve engine
2.) Get ALL of the DODGE electronic engine components (VP44, ECM, PCM, TPS & throttle cable)

Our adapter plates will not work with the Common Rail industrial engines due to the engine’s rear-gear timing system.


*Diesel Conversions® is not affiliated with Cummins, Ford, or Dodge. Our uses of these trademarks are for descriptive purposes only.

Ford®, Power Stroke®, and Super Duty® are the registered trademarks of Ford Motor Company. Diesel Conversion Specialists is not affiliated with the Ford Motor Company in any way. Cummins® is the registered trademark of Cummins Inc. and is not affiliated with Diesel Conversion Specialists in any way.